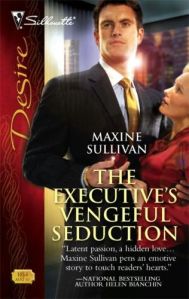 Virginia Campbell – a self-confessed bookworm who loves to cook – has created some marvellous recipes to match the food scenes in my “Australian Millionaires” series for Harlequin Desire.

Maxine Sullivan brings her “Australian Millionaires” series to a close with a powerful, passionate, and poignant love story in “The Executive’s Vengeful Seduction”! While this is an extremely sexy romance read, it is also a very deeply-felt reunion of two lost lovers. Gabrielle Kane walked out on her relationship with Damien Trent, and told him not to follow her. Five years later, still smarting from her departure, Damien seizes upon a business matter involving her father’s company as a way to bring Gabrielle back into his life. Damien’s reaction to Gabrielle is immediate and intense, and he soon manipulates her into marriage as a means of helping to save her ill father’s business from her unscrupulous cousin. Gabrielle is just as affected by Damien, and she had a good reason for leaving him when they were young. She had an even better reason for staying away–a reason her cousin uses in a blackmail attempt. Sizzling sensuality, secrets, and sentiments all come together in an unforgettable love story! Highly recommended!

One of the pleasures enjoyed by Damien and Gabrielle is fabulous food–like these great recipes:

In an oven-proof Dutch Oven, brown two pounds beef tips (or cubes of sirloin or top round steak) and one large sliced onion in a small amount of olive oil. Lightly season with salt, black pepper and garlic salt. Brown well over low heat, stirring now and then to keep from sticking. When beef is evenly browned, add one cup of water to hot pan to deglaze the juices and small brown bits. Stir in one 14 oz can of beef broth and one cup of good red wine. Add several bay leaves. Cover and bake at 350 F for at least one hour, until beef is fork-tender. Add more liquid (water, broth, or wine) as needed to keep meat from drying out. Remove bay leaves before serving.

Spray a 2 1/2 to 3 qt casserole with nonstick cooking spray. Place a layer of sliced potatoes in bottom of dish. Sprinkle lightly with salt and pepper. Cover potatoes evenly with a layer of shredded sharp Cheddar cheese. Repeat once or twice again. Add enough cream or whole milk to bring liquid to top of potatoes. Sprinkle top with grated Parmesan cheese. Cover and bake at 350 F for at least one hour until potatoes are tender.

Bring a large pot of lightly salted water to a boil. Place pasta in the pot, cook for 8 to 10 minutes, until al dente, and drain. Rinse under cold running water to cool. Place bacon in a skillet over medium high heat, and cook until evenly brown. Drain and crumble. In a large bowl, gently toss together the pasta, bacon, shrimp, avocados, Cheddar cheese, and tomatoes. In a small bowl mix mayonnaise, lemon juice, sugar, red pepper flakes and salt & pepper to taste. Mix well and pour over salad, stirring to coat. Chill at least for several hours until flavors have blended. Serve salad over lettuce.
Decadent Chocolate Pudding:
1/4 cup cornstarch
1/2 cup sugar
1/8 teaspoon salt
1 cup whole milk plus one pint heavy cream
1 cup semi-sweet chocolate chips
1 tablespoon rum
sweetened whipped cream, sliced strawberries, and chocolate sprinkles for garnish
Combine the cornstarch, sugar and salt in the top of a double boiler. Slowly whisk in the milk and cream, scraping the bottom and sides to blend in all the dry ingredients. Place over gently simmering water and stir occasionally, scraping the bottom and sides. Use a whisk to prevent lumps. After 15 to 20 minutes, when the mixture begins to thicken and coats the back of the spoon, slowly add the chocolate. Continue stirring for about 2 to 4 minutes, or until the pudding is smooth and thickened. Remove from the heat and stir in the rum. Pour into individual serving dishes. Cover with plastic wrap and refrigerate for at least one hour. To serve, remove plastic wrap and top each pudding with whipped cream. Top with sliced strawberries and chocolate sprinkles.